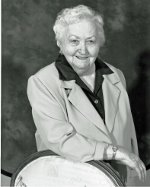 She moved to Gary, Indiana and retired after 33 years of service from Gary Steel Products, where she was a supervisor, and where she became the first female president of an AFL-CIO union. In 1989, she moved to Birmingham, Alabama, to be near her beloved son, Bill Bedwell, and his family later moving with them to Spring, Texas.

A Memorial Service was held in Tomball, Texas on July 13, 2010. Private Family Graveside Memorial Services were also held July 29, 2010 at the Lebanon Cemetery in Midland, Indiana.