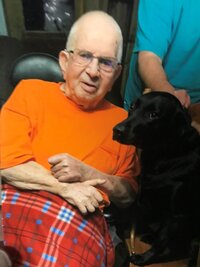 Survivors include his sons, Scott R. May (Cathy) of Hazard, KY, Kent May (Nikki) of Jasonville, IN; sister in-law, ruby May; grandchildren, Clayton May, Preston May (Macy), Mallory May (Xavier); several nieces and nephews.

He was preceded in death by his parents, wife; brother, Jack May.

Bobby graduated from Jasonville High School Class of 1947. He was a U.S. Army Veteran having served during WWII and the Korean War. He was a coal miner with Peabody Coal Co. Latta Mine and retired as the result of a tragic accident at the mine. He was a member of Jasonville American Legion Post #172. Bobby loved Harley Davidson Motorcycles and had owned several of them. He was a member of the Wabash Valley Touring Club and had ridden a motorcycle in every state with the exception of Alaska and Hawaii. He loved being outdoors working on his farm, raising cattle, tinkering with his tractor, mowing his yard, working in the garden and mushroom hunting. Bobby was an avid hunter, particularly bird hunting as well as rabbit hunting. He lived to go to the cabin and was at home fishing the river. Bobby was an avid baseball fan, his favorite team was the Chicago Cubs. Bobby was a devoted husband, father and grandfather, he was passionate about watching his grandkids as they played sports and cheering them on.