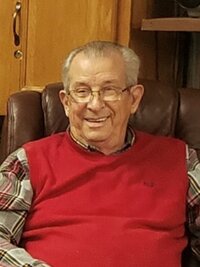 Dean started working in tobacco fields and dairy farms at 9 years old. He joined the Army at 17. Dean came to Jasonville and went to work for Evans Heating and Cooling, he also served on the Jasonville Police Force, and had served on the City Council for 4 years. Dean opened his own business Watson Heating, A/C, and Electric which he ran for 41 years. Above all else Dean was a loving and devoted husband, father, grandfather and great-grandfather. He loved his family and enjoyed spending time with them. He also enjoyed hunting and had the largest recorded buck in Sullivan County.