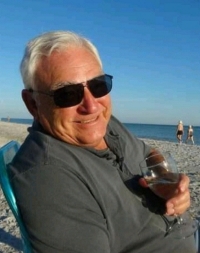 He was preceded in death by his parents, Levert and Idoma Weir, his second parents, Russel and Joyce Smith, sister in-law, Donna Weir.

Danny was a charter member of The Sons of the American Legion Post# 298 and the Hymera Alumni Association. He was called by several names including Husband, Dad, Pop, Grandpa, Uncle, Dan the Man, Danny, Pirate, and sometimes “you old coot”. He had a passion for travel and had been to all fifty states and several foreign countries. He loved fast cars, country music and spending time at the beach. He liked to surround himself with friends and family and never met a stranger. Danny was the first one to visit a sick friend and try to provide whatever help was needed. He strongly believed in the youth of today and always said the world is in good hands. Therefore, in lieu of flowers, he is asking for donations to the North Central Scholarship Fund: P.O. Box 262, Farmersburg, IN 47850. At Danny’s request a memorial visitation will be held at the Hymera Ruritan Club from 4 to 7 P.M. Friday November 20, 2020. For Everyone’s safety masks are requested.