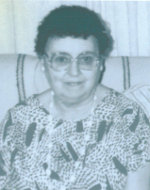 Elsie eagerly served God with all her heart. As a young girl, she and her sisters sang in the church. When her children were young, she taught Sunday School and Bible School. She attended the Assembly of God Church in Jasonville until her health failed. She then served as a prayer chain partner to pray for others in need.