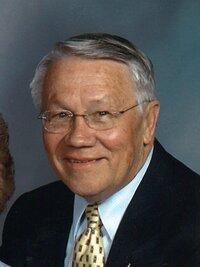 Dorman Wayne Clark, 85, of Jasonville, passed away peacefully while surrounded by his family on Monday, October 4, 2021.

Dorman married Marilyn Stockrahm on November 22, 1956. Together they raised their three children. After he retired from Public Service Indiana, the Clarks moved back to Jasonville and opened Clark’s Clothing. Dorman went on to serve Jasonville as Mayor for 12 years. They then founded The Jasonville Independent and published the paper for 17 years before retiring in April, 2021.

Dorman leaves a legacy of faith. He faithfully served God for over six decades. He was involved with many ministries and did outreach on college campuses. Dorman’s life scripture was Romans 8:31, “What shall we then say to these things? If God be for us, who can be against us?”

Dorman was preceded in death by parents and son, Mark Wayne Clark.

Public Graveside Services will be held on October 8, 2021 at 2 pm at Peavey Cemetery with Pastor Sam Bush officiating. Michael Cox Funeral Home is in charge of arrangements.