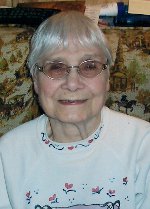 Estella was a homemaker and used to work as a seamstress at Martin Cleaners in Rockville for 10 years in her early years.  Estella bred, showed, and sold Collies through Spice Rack Collies Kennel and had several champions that came from her bloodlines throughout the United States and Canada during 57 years. Her family had a booth for 50 years at the Covered Bridge Festival and for 3 years at Billie Creek Village.