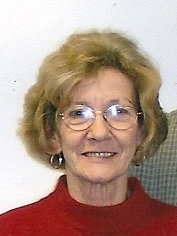 She was born October 26, 1944 in Linton, IN to Willard Stough and Virginia (Fulk) Terhune.

She was preceded in death by her parents and step-father, Leo Terhune.

Pat was the only woman Plant Manager at Charles Industries, she also worked at Shakamak State Park. She was a member of Providence Baptist Church. She enjoyed vacationing in Naples, FL and Myrtle Beach, SC, playing cards, bingo, painting, crafting and Sunday dinners with the family.