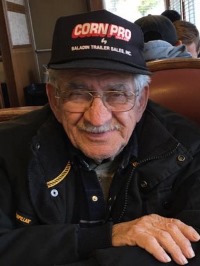 Survivors include his wife, Connie Grissom of Goshen, IN; children, Vaughna Stienstra (Daniel) of Hymera, IN, Jerry Grisson Jr. (Beth) of Coalmont, IN, Kelly Buell (Randy) of TX, Darrin Grissom (Sara) of Shelburn, IN, Dustin Grissom of Terre Haute, IN, Samantha Munson (Joey) of Augusta, GA; many grandchildren and great-grandchildren; brother, Danny Grissom (Vicki) of Sullivan, IN; several nieces and nephews.

Jerry worked as a Coal Miner, worked construction, as a farmer and was a truck driver.

Arrangements are entrusted to Michael W. Cox, Cox Funeral Home; 218 South Meridian Street; Jasonville, Indiana. A Gathering of Friends is scheduled from 5 to 7p.m. followed by a Memorial Service at 7 p.m. at the Funeral Home Monday December 16, 2019 with Pastor David Smith officiating. Military Rites will follow the service. As Jerry requested cremation was scheduled and burial will be at a later date at K of P Cemetery in Hymera, IN.