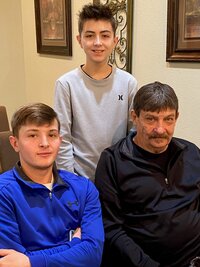 He was preceded in death by his mother.

Jake graduated from North Central High School Class of 1970. Jake enjoyed watching his grandsons at their sporting events, they were the joy of his life. He was an avid motorcycle rider and a lifetime member of the Cloven Hoofs Motorcycle Club in Bloomington, IN. He had also enjoyed riding dirt bikes. He was a Charter Member of Sons of American Legion Post #298 in Hymera, IN. Jake retired from Laborers Union Local #204 in Terre Haute, IN.

In lieu of flowers contributions may be made in memory of Jake to Sons of American Legion Post #298 P.O. Box 324, Hymera, IN  47855. Envelopes are available at the funeral home.