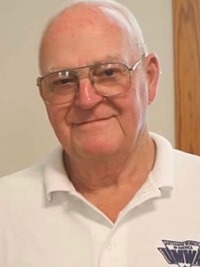 John graduated from Coalmont High School in 1961. He served in the 152nd Infantry Army National Guard. He took pride in being the former President of Peavey Cemetery Board, following his father in the position.  He was a 50 year member of Vigo Lodge F. and A.M. #29 in Lewis, IN, Valley of Scottish Rite, and a member and supporter of the UMWA local 1410. John started his career with Peabody Coal Company at the Jasonville Shops as a welder. Later he worked at the Latta Mine and after many years of service John retired from Hawthorn Mine in 2000.

John enjoyed IU basketball and was an avid Shakamak Laker fan.  John liked to go to tractor and truck pulls and loved his own truck. He was meticulous about his yard and the direction in which you mowed, some knew him as a “Yard Architect.”

He was preceded in death by his parents, brother in law, Melvin; granddaughter, Meranda Hubbell.

Interment will be at Peavey Cemetery in Clay County, IN.

In lieu of flower contributions may be made in memory of John to Peavey Cemetery. Envelopes are available at the funeral home.