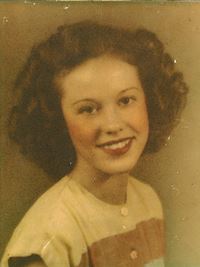 She was born January 4, 1931 at Bogle Corner, IN to William “Kess” Caddell and Frances (Sumner) Caddell.

June graduated Coalmont High School Class of 1948. She was born and raised in the Bogle Corner area. June was a member of the Jasonville American Legion Ladies Auxiliary Post# 172.

Arrangements are entrusted to Michael W. Cox, Cox Funeral Home; 218 South Meridian Street; Jasonville, Indiana. In keeping with June’s wishes cremation is scheduled, and there will be a graveside service and burial at a later date..

Interment will be at Peavey Cemetery in Howesville, IN.