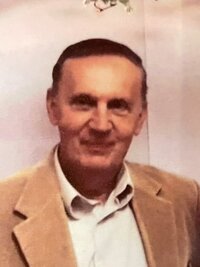 LARRY J. FOUGEROUSSE, 85, of Jasonville, IN went home to meet his Lord surrounded by his loving family on Sunday, September 4, 2022.

He was born April 7, 1937 in Jasonville, IN to Harry Fougerousse and Beulah (Smith) Fougerousse.

He was preceded in death by his parents, and wife.

Larry graduated from Jasonville High School Class of 1955. He worked at GE in Linton and Bloomington for 30 years and was an underground coal miner. After his retirement he worked at Shakamak State Park. Larry enjoyed watching sports on TV and attending his children, grandchildren and great-grandchildren’s sporting events. He was a member of Providence Baptist Church and was quite involved as a Sunday school teacher for many years. He loved Sunday dinners at home with the family gathered around the table, Larry loved his family and spending time with them. He loved talking about his family and telling about all that they were involved in. He served for 4 years in the Indiana Army National Guard.

In lieu of flowers contributions may be made in memory of Larry to Louie Romine Scholarship Foundation. Envelopes are available at the funeral home.