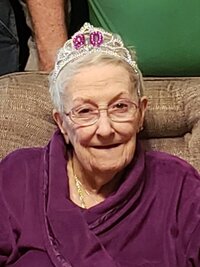 She was born November 23, 1929 in Clay City, IN to Lester Duncan and Florence (Waggoner) Duncan.

Pat graduated Jasonville High School Class of 1947. She worked at TRW, Formfit and last worked at Underwood. Pat attended and was a Lifetime Member of Lawton Street Christian Church, was a 50 year member of the Eastern Star and Pythian Sisters. She loved watching sitcoms such as Andy Griffith.