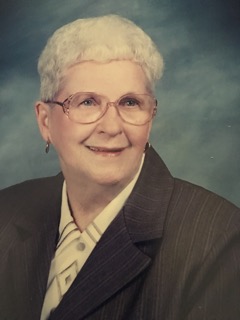 MAXINE L. PITTMAN formerly of Jasonville, Indiana passed away on June 30, 2017 at Brownsburg Meadows in Brownsburg, IN.

She was born in 1920 to Zorelda (Hendricks) Bedwell and William A. Bedwell in Sullivan, IN.  Maxine married Dennis Pittman of Farmersburg, IN in 1943.  He was a U.S. Army Veteran of World War II, member of the American Legion and Jasonville United Methodist Church.

Maxine graduated from Sullivan High School in 1938 and attended Business School in Terre Haute. After working in the Sullivan Court House for several years, she and Dennis moved to Jasonville where she assisted Dennis in their Standard Oil Agency for 20 years.

She was a member of the Jasonville United Methodist Church, Triad Music Organization, and Tri Kappa where she made many lifelong friends.

A Gathering of Friends was held at the Jasonville United Methodist Church on Saturday, July 22, 2017 from 10:30 to Noon. Memorial Services followed visitation at 12 Noon at the church with Pastor Zachary Manton officiating. Interment was at the Lebanon Cemetery in Midland IN.