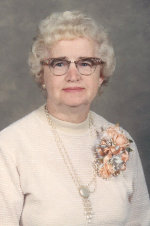 She had worked at Sarkes Tarzian at Bloomington, IN; Lane Bryant at Indianapolis, IN and retired from Hamilton’s Meat Processing Family in Jasonville, IN. Betty was a member of Jasonville Assembly of God Church.

Arrangements were entrusted to Michael W. Cox, Cox Funeral Home, 218 South Meridian Street, Jasonville, IN. Visitation was 5-9 p.m. Monday at the funeral home and 9 a.m. until service time Tuesday at the Jasonville Assembly of God Church. Funeral Services were 10 a.m. Tuesday, November 16, 2010 at the church with Pastor Dana Coverstone and Pastor Sam Bush. Interment was in K of P Cemetery at Hymera, IN.