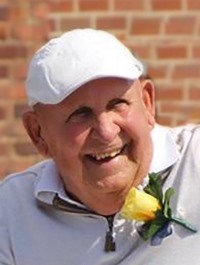 Tom was the youngest of eleven children born to Frank Green and Emma (Selba) Green on July 29, 1929.

He was preceded in death by his parents, wife and 10-siblings.

Tom graduated from Jasonville High School Class of 1948. Upon graduation he went to work at Studebaker in South Bend, IN. Following that he enlisted in the U.S. Navy where he served 4 years. After completing his military service he finished his 4 year journeyman as a pipe fitter at Detroit Allisons in Indianapolis, IN. He later retired from Citizens Gas and Coke Utility Company after over 40 years of service. Tom and Kate had four children, 10 Grandchildren and eleven great-grandchildren. He was a devoted father, grandfather and great-grandfather. He could be found attending any number of sporting events around the state cheering for His “kids”. He loved his family more than anything. Spending time together was what made him happiest. Homecoming was a favorite time of year for Tom, watching the parade and festivities that Jasonville is known for. He was proud to have never missed a Homecoming. In 2014 Tom was awarded the Distinguished Alumni award at the Homecoming Banquet. Tom was a member of Jasonville American Legion Post# 172. He enjoyed gardening, loved fishing and playing cards, especially euchre. Tom always had a story or a joke for everyone.

In lieu of flowers contributions may be made in memory of Tom to JHS-SHS Alumni Association, P.O. Box 6, Jasonville, IN 47438. Envelopes are available at the funeral home.