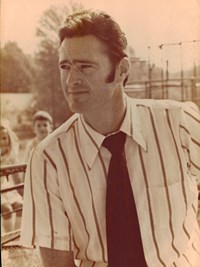 He was born December 1, 1936 in Jasonville, IN to Melvin Edwin Walters and Olga H. (Dempsey) Walters.

Arrangements are entrusted to Michael W. Cox, Cox Funeral Home; 218 South Meridian Street; Jasonville, Indiana. There will be no services per Tony’s request. In Tony’s family’s eyes he was a #1 athlete, #1 dad, and most importantly a #1 Christian who faithfully served Jesus Christ, witnessing to all he met. He was a servant of God to the end and he wants no honor or glory. All the honor and glory is to be given to Christ Jesus. Tony’s life’s purpose was to magnify our Lord and Savior.

Interment will be at Lebanon Cemetery in Midland, IN. There will be a memorial service at a later date.

In lieu of flowers donate to the Lord’s work to spread the Word of God. Tony’s wish for his friends and family would be to share the gospel of Jesus Christ. Praise the Lord!!!