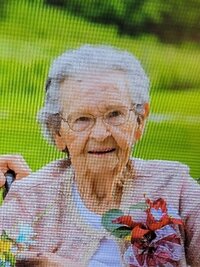 She was born June 24, 1929 in Bicknell, IN to Homer Christy and Martha (Chasteen) Christy.

Vera graduated from New Lebanon High School in New Lebanon, IN. She was a member of Dugger First Baptist Church. She enjoyed sewing, quilting, working in her flowers and mowing the yard. Vera loved her children, grandchildren and great-grandchildren and spending time with them.

Interment will be at Fairview Cemetery in Linton, IN