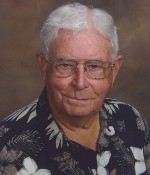 VIRGIL L. MARLOW, 79, of Jasonville, Indiana passed away 8:00 p.m. Wednesday, July 7, 2010 with his family at his side at his residence. Virgil was born May 7, 1931 in Howesville, IN on his family farm to Lebert Marlow and Irene (Hardesty) Marlow.

He was a farmer most of his life, co-founder and co-owner of Marlow Brothers Farms, worked with his father in the excavating business and was a real estate investor and developer. Virgil was a life member of Linton Moose Lodge #1434, life member of Young Men’s Club in West Terre Haute, Member of Zorah Shrine of Terre Haute, Newberry F & A.M. Lodge #166, Scottish Rite Valley of Terre Haute, Sullivan County Shrine, Son’s of the American Legion Jasonville Post #172, Elks Lodge in Brazil, Past President of the Oriental Band at Zorah Shrine, and Past President of Peavey Cemetery Board

The family invited friends and family to the Ty and Lori Marlow home for food and fellowship following the funeral services on Saturday evening.