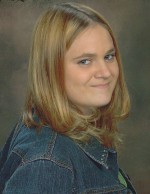 She was born March 22, 1992 in Sullivan, IN to Robert White and Catrena Lynn (Simmons) Johnson.

She was Preceeded in death by her paternal grandfather, Kenneth “Buster” White, and cousin, Michael Wayne Simmons.

Tia had worked summers at Shakamak State Park, and was attending Ivy Tech in Terre Haute. Tia’s brother, Jeff invites her friends to bring photos and share them as space will be made available.

Interment was at Fairview Cemetery in Linton, IN.

In Lieu of flowers donations were made to help with funeral expenses.