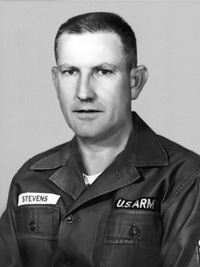 WILLARD CLEVELAND STEVENS, 92, of Coalmont, IN passed away on November 26, 2020 in his home surrounded by his loving family.

Willard was a 1946 graduate of Coalmont High School. He was a 7 ½ year Veteran of the U.S. Navy and served during the Korean War where his ship, the heavy cruiser USS Los Angeles, was hit four times by enemy fire in Wonson Harbor, North Korea. Prior to this, he worked a year for the Navy Department in Washington, D.C. Willard then served aboard the USS Stickell and the USS James E. Kyes, both destroyers, and a part of the Seventh Fleet in the Pacific. He retired as 1st Sgt. of Company B, 152nd Infantry Transportation Battalion, 38th Division of Brazil, Indiana after 13 years of service. He also retired from Alcan Aluminum Company after 19 years. Willard was a member of Friendly Grove Baptist Church where he served as the following: Sunday school teacher, Sunday school superintendent, deacon, trustee, moderator, and cemetery trustee. He liked to hunt and fish. He also enjoyed raising cattle, baling hay, and gardening. He loved spending time with his family and making homemade ice cream. Willard married Barbara Ann Shidler on May 24, 1953. They spent a wonderful 67 years of love and happiness together.

Arrangements are entrusted to Michael W. Cox, Cox Funeral Home; 218 South Meridian Street; Jasonville, Indiana. Visitation is scheduled from 11 a.m. to 1 p.m. Tuesday December 1 at the funeral home. Funeral Services will immediately follow visitation at 1 p.m. Tuesday at the Cox Funeral Home with Pastor Dick Smith officiating. The family is requesting that masks be worn by all who attend.

Interment will be at Maple Grove Cemetery in Clay County, IN with Military Graveside Rites.